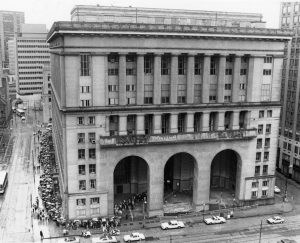 Job seekers lined up down Forbes Ave. and wrapped around the Pittsburgh City-County Building 1983

Before I go into detail on the late, great Myron Cope, it’s important to illustrate the dichotomy of the backdrop that exists between the renaissance Pittsburgh is experiencing today, and the depression era Pittsburgh of the 1970s and 1980s. The Steelers ascension from a 40-year perennial loser to the most successful franchise since the 1970 AFL/NFL merger, came at the exact time that the city of Pittsburgh was beginning to enter the early stages of a severe economic downturn. When Franco Harris made the Immaculate Reception on December 23, 1972 unemployment in the region was 4.3 percent and there were 303,600 manufacturing jobs. A decade later in 1983, unemployment in the region peaked at 14.7% (with areas like Beaver County experiencing a staggering unemployment rate of 28%) and manufacturing jobs plummeted to 196,800.

The collapse of the steel industry was already in motion during the 1960s, but began to accelerate throughout the 1970s, with the final death blow coming after the 1981-1982 recession. Local newspapers were littered on a weekly basis with article, after article, after article regarding layoffs and plant closings during 1982 and 1983. The steel mill closings had a ripple effect all over the region as raw material suppliers, transporters of those materials, and other factories involved in the supply chain were shuttered. Between 1979 and the end of 1985, the greater Pittsburgh area lost 113,000 manufacturing jobs, with almost 59,000 of those losses in basic steel (and 23,000 of those losses in basic steel took place in a two year period from 1983 to 1985). When the hemorrhaging stopped in 1986, there was a permanent loss of 120,000 manufacturing jobs. Today there are no steel mills within the city limits of Pittsburgh. Pittsburgh’s last piece of the steel industry, LTV Steel, closed its Hazelwood coke plant in 1997 and was demolished in 1999. Today shopping centers, office complexes, technology centers and residences occupy the former sites of steel giants like US Steel and J&L.

As jobs vanished, so did Pittsburgh’s population. Metropolitan Pittsburgh dropped a higher percentage of population in the 1980s than Detroit and Cleveland combined, and 1984-1985 was the worst period for out-migration. Net loss of population due to migration exceeded 50,000 people a year across the Pittsburgh region in the early 1980s. As higher paying union jobs dried up, people either took lower paying jobs or left the area. Allegheny County lost over 113,000 people during the 1980s. The majority of those that left the region were between 20 and 35 years old, as they were impacted greatly by layoffs in manufacturing due to the seniority system in place. This migration of younger workers out of Pittsburgh in the 1980s is why Steeler Nation is so strong across the country. As Pittsburgh’s population decreased drastically, so did its tax base. Making matters even worse, major corporations based in Pittsburgh (like Gulf Oil, Westinghouse and Rockwell International) were bought out and their headquarters relocated. As a result, high paying white collar jobs went elsewhere, and the area suffered brain drain on top of having its manufacturing gutted and tax base decimated. Pittsburgh’s current renaissance is truly amazing and a testament to the city’s tenacity.

“The Ultimate Steelers Fan” Bud Recktenwald heading to his tailgate spot in the predawn hours before a 1pm Steelers vs. Pats game in 1998. His car is now enshrined at the Heinz History Museum.

The Steelers ascension to a dynasty in the 1970s gave the city something to cheer about and coalesce around. Sundays became a temporary escape from reality for fans. A certain camaraderie was built amongst Steelers fans outside of Three Rivers Stadium on Sundays prior to kickoff…something that I feel has declined since the North Shore as been redeveloped.  Today the area surrounding Heinz Field is full of bars, restaurants, hotels, a concert venue and even a casino…tailgating keeps getting pushed out. Back then it was just Three Rivers Stadium surrounded by a concrete desert of parking stalls, which on Sundays tailgaters filled to capacity hours before game time. By the time the gates opened and the party carried from the parking lot inside, the fans were primed and ready to go. It was a different vibe back then. The city was more blue collar so the fans were rowdier and more vocal. The stadium was the traditional enclosed cookie cutter layout of that era, and the crowd noise was amplified as a result. The modern amenities that can be found at Heinz Field were non-existent…luxury boxes were minimal and fans couldn’t escape the elements by huddling inside heated, luxurious club level concourses. Fans could bring small coolers of food and non-alcoholic beverages into the stadium. As a result you had a more affordable ticket/experience and as a result a more ardent fanbase. This culminated in a stadium that literally shook when fans were stomping to “Here We Go Steelers!”

While slamming Iron City beers in the parking lot definitely helped to lubricate the fanbase, it was that distinct voice with the nasally, thick Pittsburgh accent blaring out of every car speaker in the lot that really got fans into game mode. Against the drab backdrop of 1970s and 1980s Pittsburgh was this complete contrast – “The Voice of The Pittsburgh Steelers” Myron Cope. He was the most unique color analyst that the sports world has known, and I’m glad that he was ours. Every radio was tuned into WTAE 1250 AM to listen to Myron Cope and Jack Fleming (and later Bill Hargrove) on the Steelers pregame show. And once the game started, you would see lots of fans in the stands (especially in peanut heaven) with their walkman radios and earphones listening to the play-by-play broadcast of the game by Fleming and Cope. 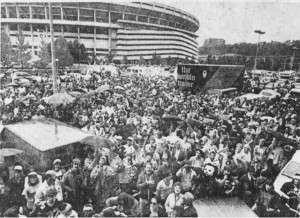 Three Rivers Stadium parking lot for a special tailgate party during the 1982 NFL lockout. The Terrible Trailer can be seen in the background.

When I started attending games in the late 80s as a young kid, we would sit in the 6th Street Parking garage in my grandfather’s old burgundy Cadillac listening to Cope on the pregame show while eating chipped ham sandwiches. That’s what I remember the most…I could barely tell you anything that actually happened during the games because the Steelers in the late 80s were quite forgettable. But it was Cope’s voice and his passion that jumped through those speakers and got you excited and energized, even if you had no reason to be. Cope wasn’t a “homer” when it came to commentary, and that was why he resonated. If the team was lousy, he let it be known. He articulated the emotions that fans were feeling at any given time, and in a way that no one else could. Cope was the exact person needed for the job at the exact right time. He carried the Steelers through the dull days of the 1980s when they had few wins and even fewer stars. He was a bonafide yinzer who was the embodiment of a fervent fan base who lived for Sundays.

I know the loud atmosphere at games has mainly been affected by the open design of Heinz Field which dilutes the crowd noise. And I know higher ticket prices combined with a city in transition from dominantly blue collar to increasing white collar brings a different temperament of fan to the games. But I believe the energy at the games took a hit after Cope’s health started declining, leading to his retirement in 2005 and passing in 2008. But Cope’s legacy lives on and his energy is resurrected at every home game as 60,000 fans twirl their Terrible Towels in unison.